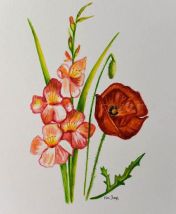 And here is August – we are all a bit uncertain as to where this year has gone, and already we are on the verge of stepping into month 8.

The Gladilous and Poppy are the two “flowers for the month of August” – they are supposed to represent character and imagination and we are certainly in need of those properties in the coming weeks and months.  Businesses are endeavouring to get back on their feet, despite the best efforts of a potential second wave of virus; the economy is making headline news and we’ll see the gradual pulling back on furloughed staff.

There will be some who face redundancies and will need both character and imagination to see them through this period.

The precious stone for August is Peridot. Green in colour, in the Middle Ages, the gemstone was considered to provide healing powers, curing depression and opening the heart.  Yep, we could do with that right now too!

In the Oxford dictionary august is defined as dignified and impressive – eg “he had an august manner” and whilst we may denigrate leaders and politicians for their lack of both, it is beholden on us to remember to endeavour to be an example in our own lives and attitudes.

It is easy to take to the social media keyboards and berate others for their views and decisions, but taking some time to review how we behave ourselves should be a focus too.  This is something we can control in these times of uncertainty and having a sense of oversight of our own behaviour enables us to feel more grounded.  We can only change the political landscape at election time, but how we respond to the situations we find ourselves in is within our capability.

August is also the month for National Smile week (it’s the second week of the month) – go on, even if wearing your face covering, your eyes can smile – it can make someone’s day.

19th August is World Humanitarian Day – and boy do we need it this year.  Held by the UN every year, it recognises those who have dedicated their time to helping people in crisis.  This year, probably more than any other, with a global pandemic, let’s all recognise those individuals who have helped others – some may be on the international or national stages, many will be local shops, volunteers, key workers and medical staff. But many will be a neighbour or friend who has kept in touch and been on the end of a phone or zoom call, providing laughter or a friendly ear.

Let’s celebrate August by recognising how far we have come, the road still to be travelled and the friends we have made along the way.